5 Mistakes I Made as a Beginning Photographer 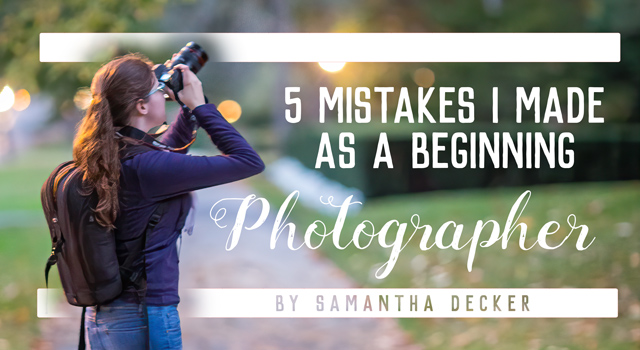 I've been a serious photographer for over a decade now, and along the way, I, like many others, made some mistakes I wish I could go back and undo.  If you're starting to get interested in photography, I hope I can give you some insight so you don't make the same mistakes I did.
Over Editing My Photos
When I first got interested in photography, applying lots of filters and amping up the saturation was very trendy, but it also tends to be a mistake many beginning photographers make.  When I look back at my edits from 10 years ago, I cringe.  They look super fake and over saturated.  I think I felt like I could save a bad photo by adding filters (like Topaz Adjust or Photomatix) to it, and you can't really save a bad photo.  If it's not compelling on its own, a filter won't fix it.  And over-editing a good photo can ruin it.  Now, of course I still edit all my photos, but today I go for a more natural look. 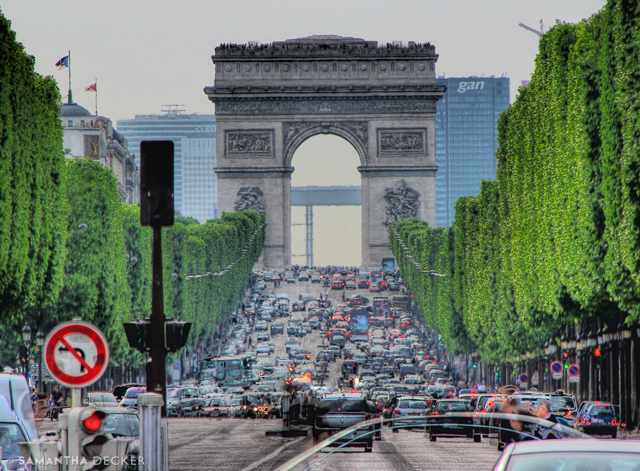 A 2009 edit of a 3-shot HDR bracket I took of the Avenue des Champs-Élysées in Paris.  Note the ghosting from the cars and people moving and the overall ugly colors from the Photomatix edit. Another 2009 edit of the same bracket, but this time I added a texture over the top.  Textures can be cool, but in this edit, it just wasn't done well. 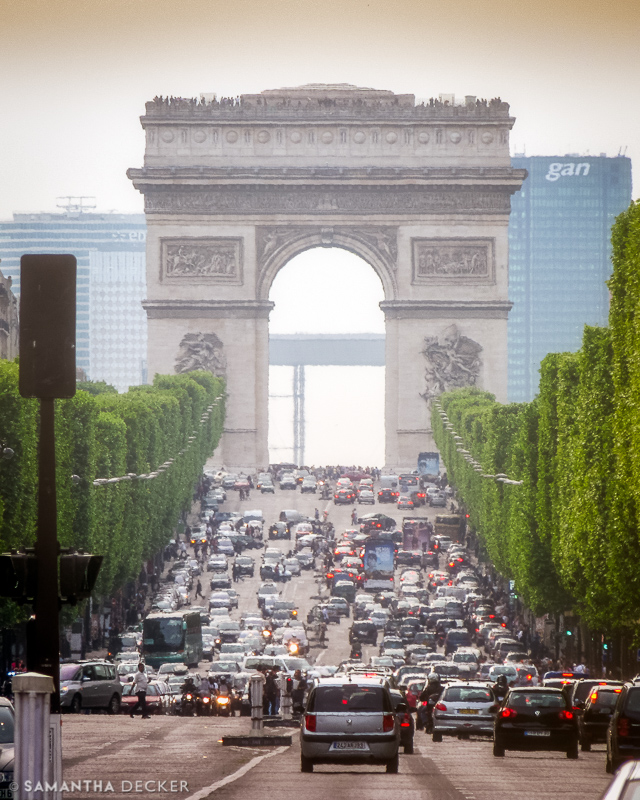 A 2020 edit with a fresh new crop and subtler changes applied.

Not Caring Enough About Composition
Composition is one of the most important elements that determines how compelling a photo is.  When I first started in photography, I focused more on the subject than on composition.  If I had a good subject, I figured the composition didn't really matter.  I just sort of aimed my camera at the subject, and shot.  I didn't pay enough attention to things like negative space, angle, and when it comes to portraits, not cutting off people's feet or hands.  Luckily some of these things can be fixed by thoughtful cropping, but sometimes they can't be or you lose significant resolution. 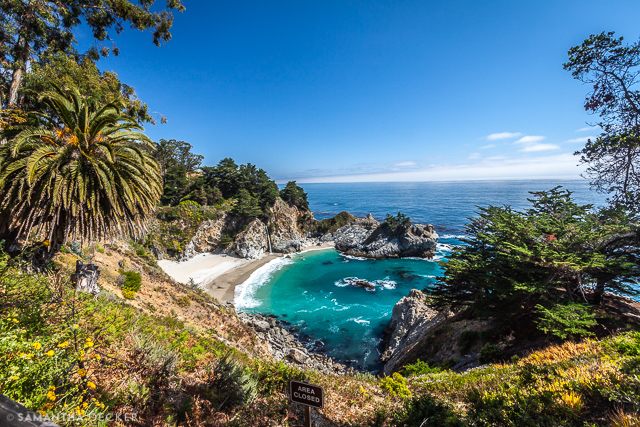 In this 2010 photo I took of McWay Falls in Julia Pfeiffer Burns State Park in California, I chose to use my 10-22mm lens at its widest setting, which left a lot of boring, negative space in the sky, as well as a distracting sign in the foreground that detracted from the photo. 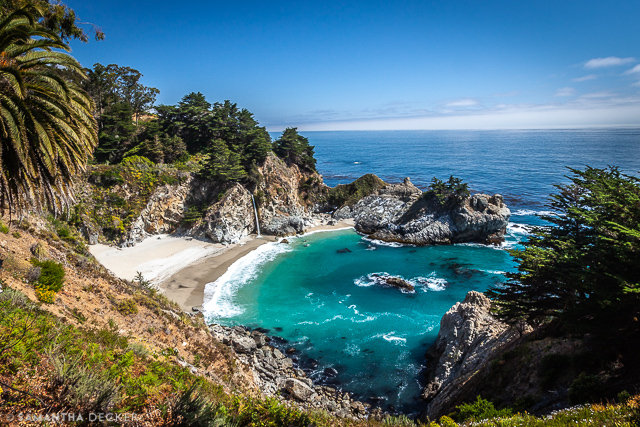 Luckily, a little careful cropping vastly improved the composition of this photo and brought the focus in on the falls and the surrounding area down below.

Not Shooting RAW
This is my biggest regret.  Shooting RAW lets you do a lot more with your photos when you're editing them.  You can change the white balance, you can recover blown out highlights and darkened shadows.  If you shoot JPG, you severely limit the amount of editing you can do to your photos.  You can even shoot RAW on your phone now.  Most beginning photographers don't shoot RAW because they don't know how or don't want to edit their photos or because it takes up too much space (and that is true; a RAW file takes up easily 20-30x more space than a JPG from the same camera).  If you're not ready to edit your photos yet, almost all semi-serious cameras have a RAW+JPG option.  You have your JPG file ready to share with the world right now, but you also have a RAW file that you can go back and edit later.  Believe me, if you are really interested in photography, you will regret it later when you realize how powerful a RAW file is. 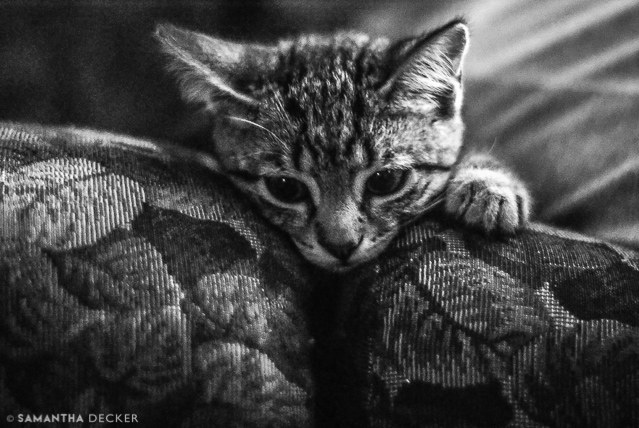 In this 2009 photo of my cat Casey, taken at night with only available light in the room, not shooting raw made it pretty much impossible for me to bring out the shadows or correct the white balance, essentially forcing me to convert to black and white.  He's still cute either way though!

Not Using a Backpack
When I first got into photography, I used a few different bags to lug around my lenses, but none of them were comfortable.  First I used a sling pack that went over one shoulder.  It just slid around to open up, so it was very convenient.  The problem is, it puts all the weight on one shoulder, and that can get very painful when you're walking around all day.  There's also no way to switch which shoulder it goes on.  Then I bought a very fashionable Kelly Moore bag, which basically a huge cross body camera bag that doesn't really look like a camera bag, which is a plus.  But even though it looked great, once again, all the weight was on one shoulder.  At least with this bag, you could switch shoulders when one shoulder starts to hurt.  All you had to do to change lenses is reach down into the bag, so again, it was very convenient.  I took this bag on a week-long trip to France, though, and I was in a lot of pain by the end of it.  I remember standing in line in JFK airport before even getting to France and being in a lot of pain, so I knew then that I had made a mistake with this bag.  Finally, I invested in two Lowepro backpacks.  They are the same style but different sizes.  What I like about these backpacks especially is that they zip on the side that faces your back, making it much harder for a pickpocket to get at your goods.  This makes me feel more secure when I visit big cities.  Because they are backpacks, the weight is distributed evenly on both shoulders, and there is also a sternum clip to help distribute the weight even more.  Now, I typically bring quite a few lenses with me when I'm going on a photo outing, so I won't say that after a long day of taking photos, these backpacks don't hurt a little bit, but they hurt a lot less than the previous bags I used.  They also have a way to attach a tripod.  The thing to note here of course is that being backpacks, they are not as convenient to open.  You are supposed to take the backpack off, but with the smaller backpack, I usually just attach the hip belt, and swing it around and open it while it's still attached to me.  It's definitely not as convenient as the previous bags I used, but to me it's worth it not to be in so much pain.  If you travel with a lot of lenses, I can't recommending enough using a backpack as opposed to something that goes over one shoulder. 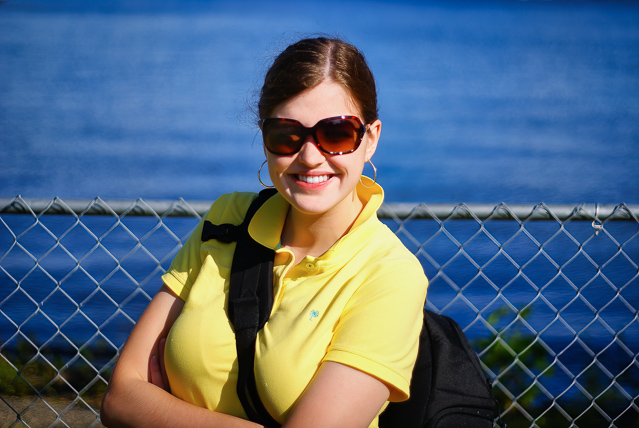 Here I am in 2009 with my first camera bag, the LowePro sling pack that only went over one shoulder.  Let's not tell anyone I used to pop my collar like that. 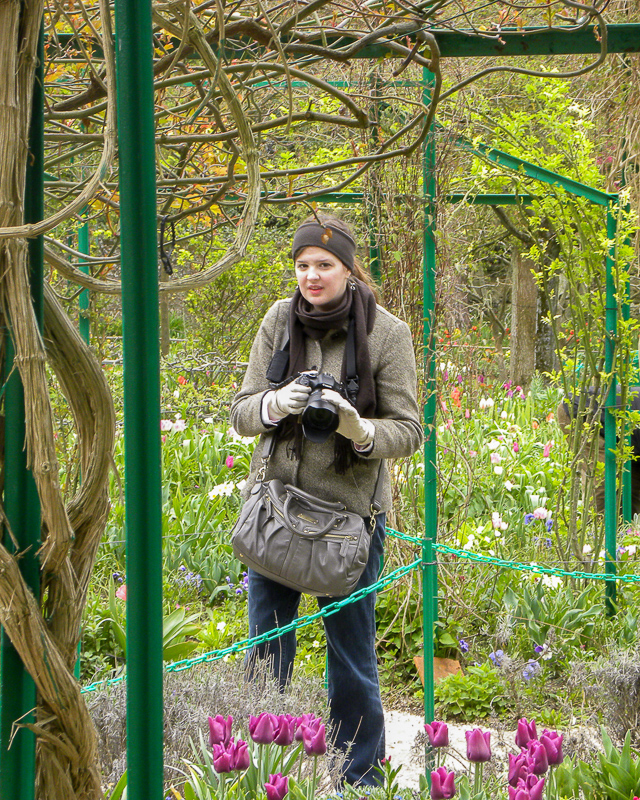 By 2012, I was testing out this beautiful Kelly Moore bag, which held all the lenses I could possibly need for a week's trip to France.  Once again though, my shoulders hated me by the end of the trip. 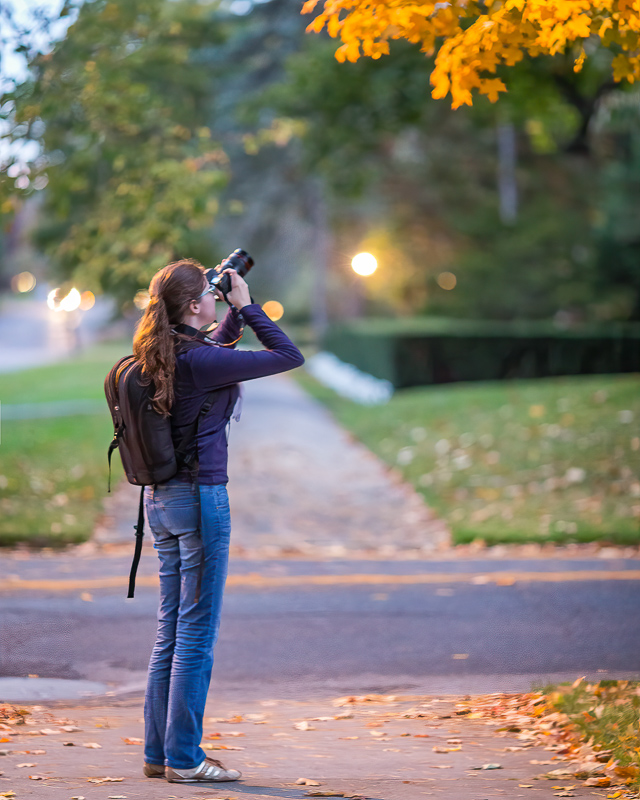 By 2014, I had wisened up and invested in a very practical Lowepro backpack, which distributes the weight evenly on both shoulders and includes a sternum clip to further distribute the weight.  This has been my go-to (along with a larger version when needed) whenever I am lugging lots of lenses around.  Photo by Barb Tyler.

Relying Too Much On One Zoom Lens
When I first got into photography, I loved my Tamron 18-270mm lens.  It had an incredible range, which meant I didn't have to change lenses very often.  The problem was, the image quality wasn't really that great (although technology has improved since then), at its widest it didn't really get that wide, and the aperture was really slow.  So, as they say, it was a jack of all trades but a master of none.  It was not a great portrait lens, because the aperture was too slow to blur the background, it was not a great architecture lens because it wasn't wide enough, and it wasn't good indoors, because, again, the aperture was too slow for the low level of available light.  These days, I sometimes have to change lenses more frequently when I'm out and about, but I come away with better shots.  If I am shooting architecture, I slap on a wide angle lens.  If I'm taking portraits, I'll use a super fast prime.  It's more of a hassle, but hey, no pain, no gain. 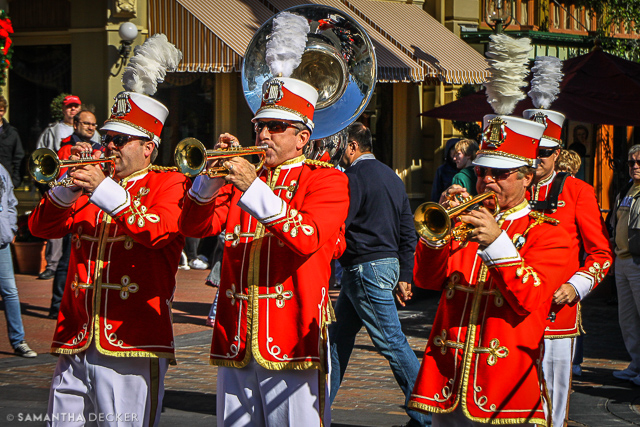 In this 2010 photo of the Main Street Philharmonic at Walt Disney World, I used a superzoom.  The slow aperture meant I was unable to blur the background behind them, which distracts from the main subject of the photo and leaves it overall looking uninteresting. 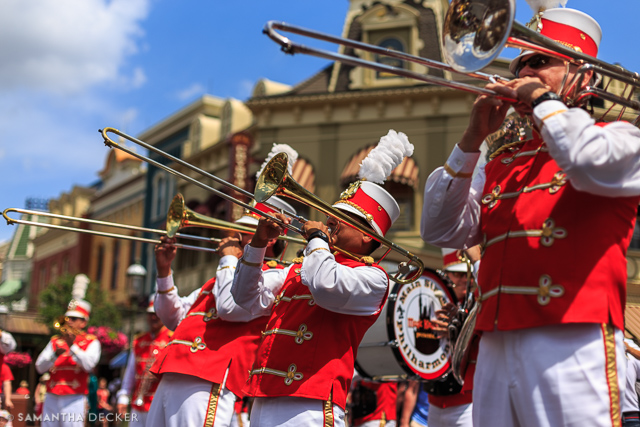 I photographed the same band in 2013, but this time, I used a 50mm f/1.4 lens to separate them from the background (I also had a better composition, with the buildings of Main Street USA visible in the background).  This ended up being a much more interesting photo.
To see more of my photos, be sure to follow me on Instagram.
All photos in this post © Samantha Decker and may not be reused without permission.

Liked this post? Subscribe by email to get future posts delivered to your inbox!
Please watch for an email verification email from Feedburner, which syndicates this blog.
Labels: inspiration tips