If Your Eyes Were a Lens 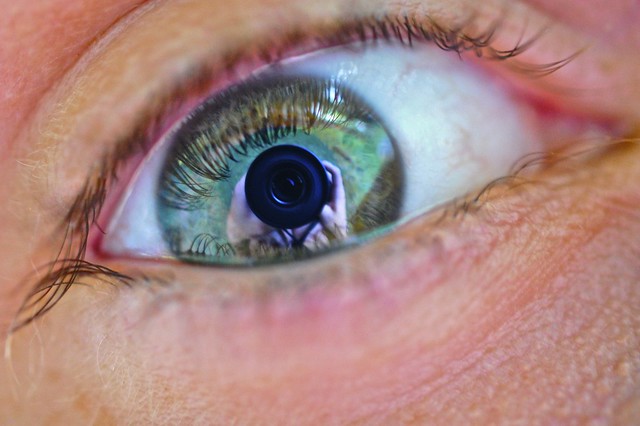 Photographers Eye by Garettt is licensed under CC BY-SA 2.0.

For those of you who learn by analogy, this list of comparisons between the eye and a lens will help you understand better how exposure works.

If your eyes were a lens...they would run on Auto ISO.
Why is it that when you turn on a light in the middle of the night, you can barely keep your eyes open? Because your eyes have to adjust their sensitivity to the light, just as a camera running on auto ISO. To enhance this analogy, imagine that your eyes are running at "ISO 6400" or higher in the dark to allow you to see details in limited light, just like you would need to take a properly exposed picture in this setting. When the light goes on, the picture you're seeing suddenly becomes drastically overexposed until your eyes (or brain...or...whatever...) automatically dial down the "ISO."

If your eyes were a lens...binoculars would be teleconverters.
If you really want to zoom in on a subject, you can attach a "teleconverter" to your lens.  A teleconverter on a lens increases the lens ' focal length, but, just as the image you see looking through binoculars is not as pristine as it would be if you were really that close, teleconverters can lower the quality of the image as well.

If your eyes were a lens...you would squint to raise the f/stop.
F/stops on a lens, also known as aperture, control how wide open or closed the lens is. Aperture comes from the Latin word for open, so it's aptly named. Just as you lower the f/stop to get a wider opening and thus, a shallower depth of field, opening your eyes or squinting them controls how much of what you see is in focus.

If your eyes were a lens...sunglasses would be filters.
Sunglasses allow you to see in bright light without darkening all the details, and polarizing filters do the same thing. I have a pair of sunglasses that tints everything pink, not unlike a skylight or a warming filter.

If your eyes were a lens...eyelids would be lens caps.
And that caps it off!