How to Tell if a Photo Was (Probably) Stolen 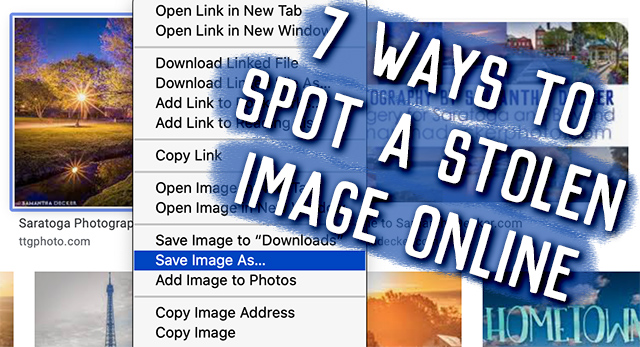 A friend and I were recently talking about some of the ridiculous ways in which image thieves make it obvious that they have stolen a photo.  As a photographer, I am no stranger to having my photo stolen.  Luckily, I use an agency called Pixsy to find unauthorized uses of my images by businesses and organizations and recover the retroactive licensing fees I was entitled to in the first place.  Click here to read my previous posts about copyright, which include 25 copyright myths debunked, an explanation of why photographers do and don't use watermarks, and what Creative Commons is and whether or not you should use it.
Full disclaimer:  Only the rights owner of an image can say for sure whether their photo has been stolen.  I'm not suggesting you take action against agencies who do any of the things below, however, if you notice any of them, do be wary, as they tend to point to a much higher likelihood that the image was stolen.  And, for what it's worth, I'm targeting businesses and organizations here.  Stealing images for personal use is illegal too, but commercial and organizational infringement is more egregious and strips photographers of their ability to earn their worth with their photos. 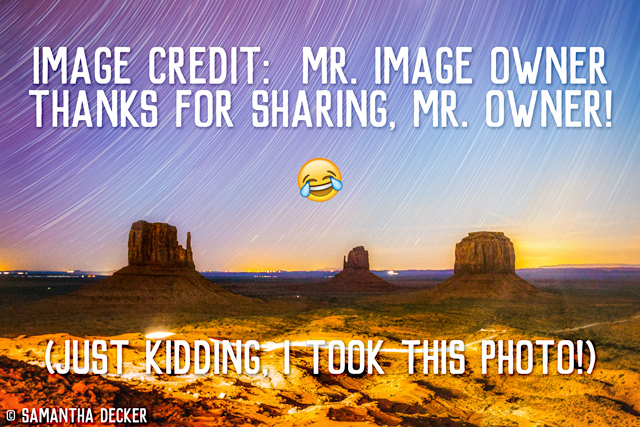 In my experience, the only people who write "no copyright infringement intended" under a photo are people who have stolen the photo.  Someone who had permission to use the photo would not feel compelled to write such a disclaimer.  Additionally, if someone had permission to use a photo, they would know who to credit.  Ironically enough, saying "all credit goes to the photographer" isn't crediting anybody!  It's just pointing out to your audience that you have stolen the photo and have no idea where it came from, and didn't even bother to try to track down the photographer.  In my post about copyright infringement myths, I talk about how claiming that you don't own an image does not legally release you from liability, it actually makes you more liable.  PS, click here to order a print of the photo above (without all the silly text!) 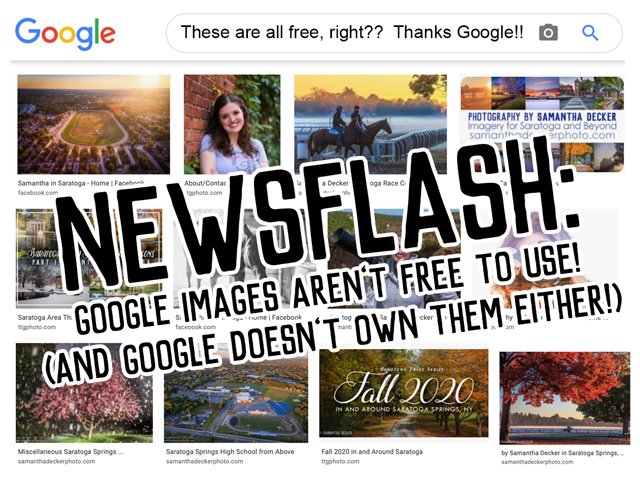 2.  The image is credited to Google.

Google does not create photos, so it would never be appropriate to credit them as the creator of a photo just because you found it there.  I once met a marketing representative at a business mixer who looked absolutely incredulous when I informed him that Google doesn't own the images that appear in their search results and that they aren't free to use.  This guy ran social media accounts for a living.  That's someone who really should know better. 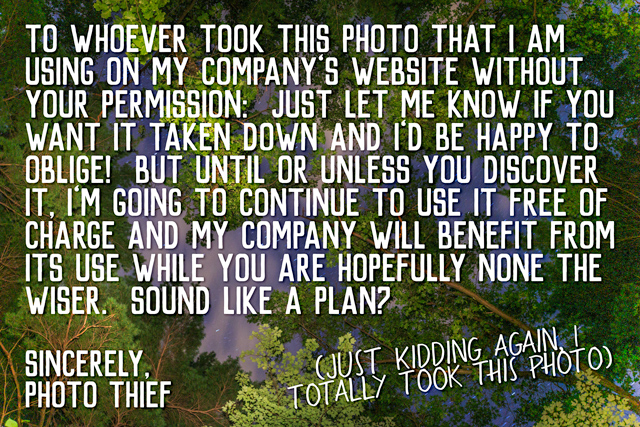 3.  A ridiculous line appears somewhere on the site suggesting that anyone who wants their photo removed should contact them. 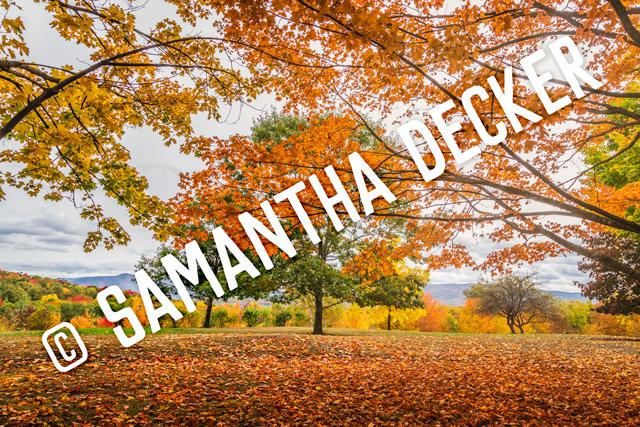 4.  A giant watermark covers a large portion of the image (bonus points if it's from a stock agency like Getty!)

Generally, if you license an image legally, the rights holder will provide you with a version without a watermark, except for maybe a small copyright notice in the corner for editorial use.  If there's a giant watermark left on the image, there's a pretty decent chance it was stolen.  I'm not sure why people take the gamble with stealing images from major stock agencies like Getty, as they have a reputation of aggressively pursuing unauthorized uses of their images (full disclosure:  some of my images are available to be licensed through Getty).  PS, click here to order a print of the photo above (without the watermark!). 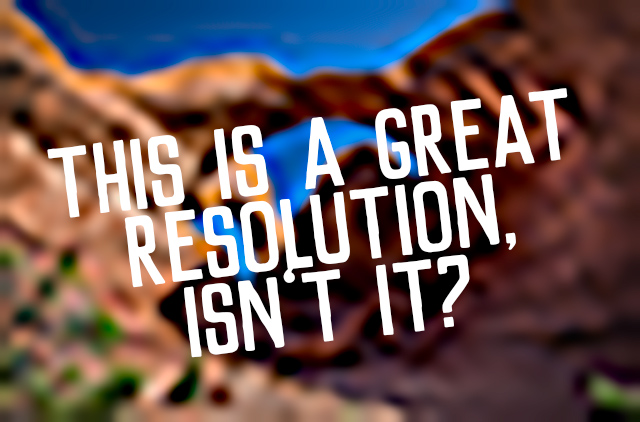 5. The photo is very grainy or low resolution.

Now, don't get me wrong, some people aren't great at optimizing their own images for web and social media use, but generally, if someone has the rights to an image, they have access to a high resolution version of it.  If you see a lot of photos on a business's website or social media channel that are especially grainy or pixelated, that's a bit of a red flag that they may be stolen.  PS, click here to view and order a nice, high resolution print of the above photo. 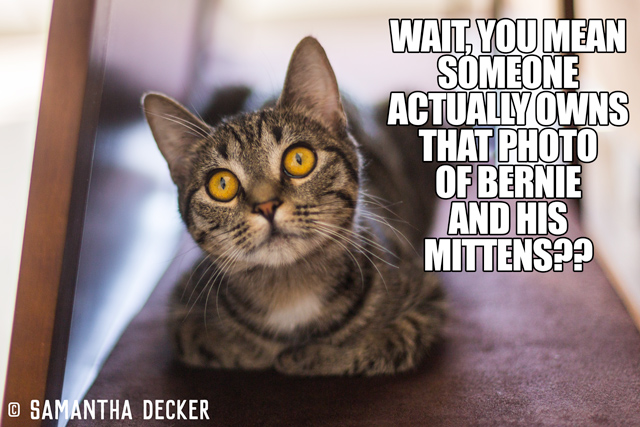 I would venture to guess that 99.9% (or more) of images used in memes are stolen.  Memes are fun to send to your friends in text messages, but businesses and organizations should be very cautious when uploading them to their own websites or social media channels.  If you don't have the rights to use the image in a meme, then you're infringing on someone's copyright, and that's illegal, no matter how many people have done it before you.  Everyone's been sharing that picture of Bernie Sanders in his mittens at the inauguration and photoshopping him into different locations, but remember, someone took that photo and owns the rights to it.  I hate to be a Debbie Downer, but if a photo I took went viral like that and tons of businesses and organizations were using it without my consent to engage their audiences and I got no compensation for it, I'd be pretty upset. 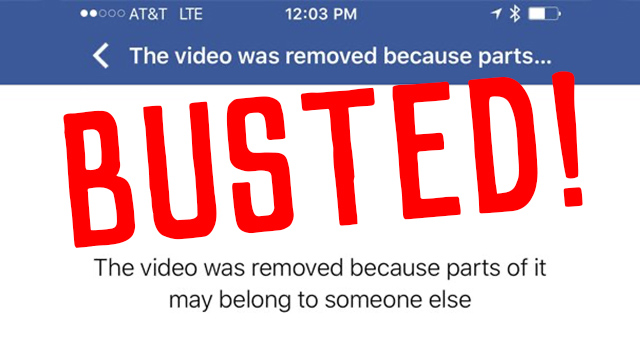 7.  BONUS!  The photo has disappeared, but a line of text appears that says, "This item has been removed due to copyright violation."  Yikes!

Do you want your customers to come to your Facebook page and see a notice like this?  If you steal a photo, you're taking the gamble that this may happen.  It doesn't make you look very reputable to your customers.  The best way to avoid a situation like this?  Don't upload anything you don't own or have permission from the rights holder to share!  It's right in Facebook's, Twitter's, Instagram's, etc. terms of service!

By the way, there is such a thing as fair use, under U.S. Copyright law, where a photo may be used in some very specific situations (such as for commentary, parody, or some educational uses) without permission from the rights holder.  Unfortunately, though, too many image thieves like to claim fair use for just about anything without actually getting to know the doctrine and how it works.  Click here to learn more about fair use.

Liked this post? Subscribe by email to get future posts delivered to your inbox!
Please watch for an email verification email from Feedburner, which syndicates this blog.
Labels: copyright