Window to the Past: Photos of Old and Abandoned Buildings 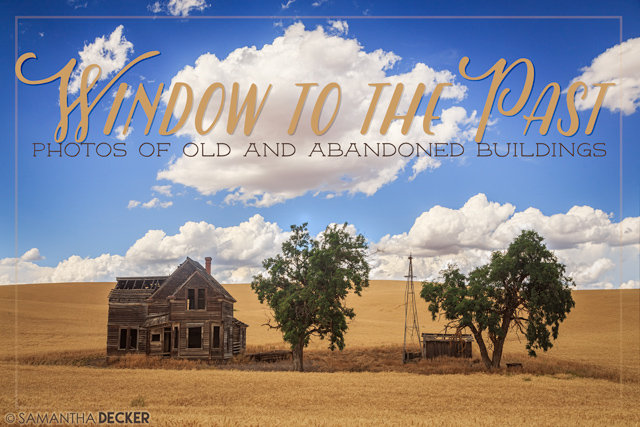 Old and abandoned buildings have long been a favorite photo subject of mine.  I'm not alone either, as many of the old or abandoned buildings I've photographed in my travels I discovered because many others photographed them before me.  In this post I've included a few of my favorite photos of such buildings.  The buildings in this post are all old, and all of them are showing some signs of wear, but not all of them are completely abandoned.  A few of them are open to the public, and are maintained to the extent that they are safe for visitors, but they remain weathered enough that a visitor can still feel a clear link with the building's past.

For those buildings that are abandoned or privately owned, keep in mind that it is never advisable to go into these buildings or on the land to take photos.  It is usually illegal and also potentially really dangerous given their condition.  I have taken photos of such buildings from the road or from a public spot. 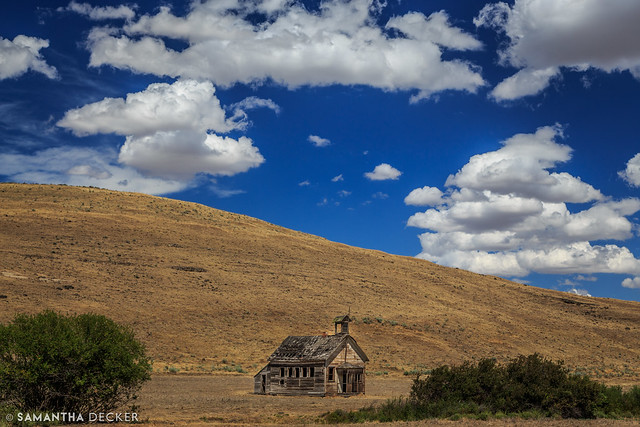 I cited the above photo as one of my favorites of 2016.  An old abandoned schoolhouse is like the holy grail of abandoned building for me, since I'm a teacher.  This one is called the Eightmile Schoolhouse in Boyd, OR.  You can read more about my adventures in the Columbia River Gorge area of Oregon here. 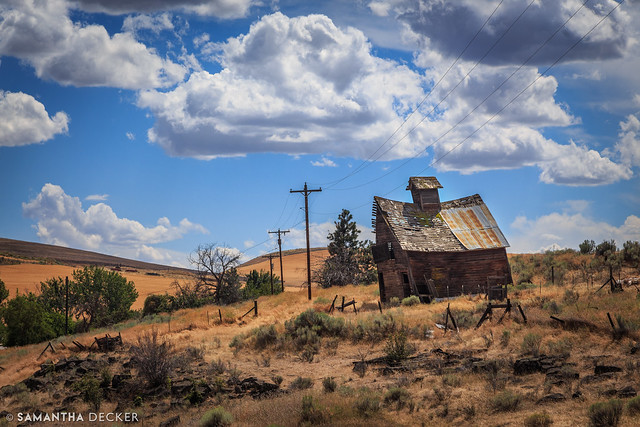 Another interesting find in Boyd, this old barn. 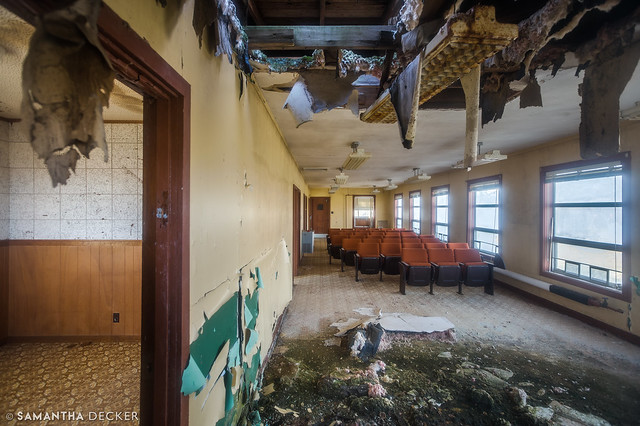 Above, I took this photo peeking through the window at the theater at the former North Truro Air Force Base, which is now owned by the National Park Service and being transformed into the Highlands Center.  You can see more photos from this visit here. 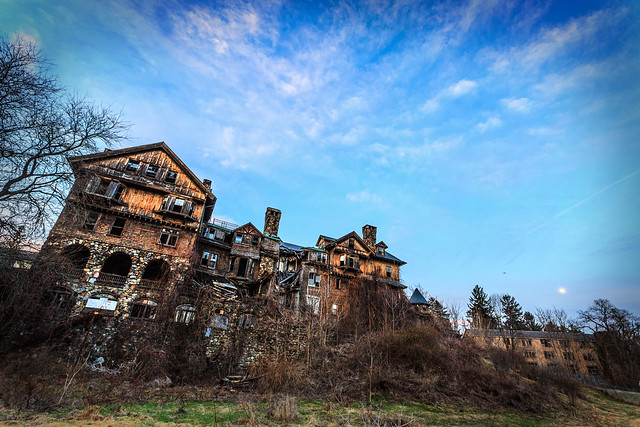 I had been wanting to visit Halcyon Hall (above), part of the former Bennett School for Girls in Millbrook, NY, for a couple of years after seeing photos of it on Flickr.   It's such a shame that this once beautiful building is now falling apart.  I took this photo on the way back from my visit to Hyde Park.  You can see more photos from that day here. 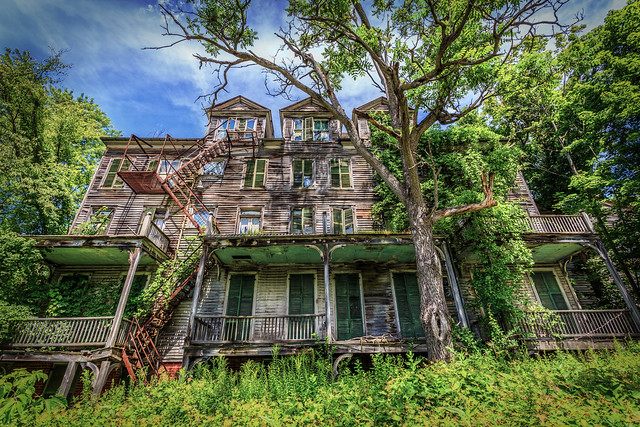 The Walloomsac Inn in Bennington, VT, used to be a popular destination.  Today it is privately owned, but many residents would like to see it restored to its former glory. 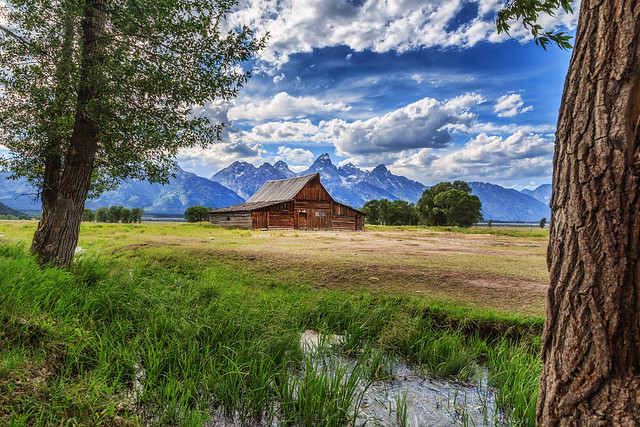 The T.A. Moulton Barn in Grand Teton National Park is one of my favorite old buildings.  This is part of Mormon Row, a series of barns and homesteads built by settlers in the early 20th century.  You can read more about my trip to Yellowstone and the Grand Tetons here. 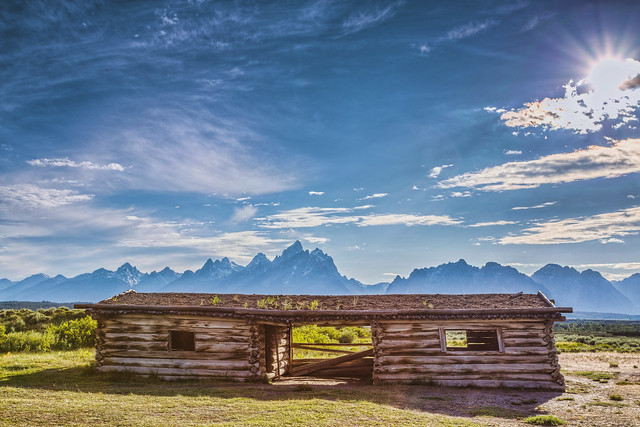 The Cunningham Cabin is another gem of the Tetons. 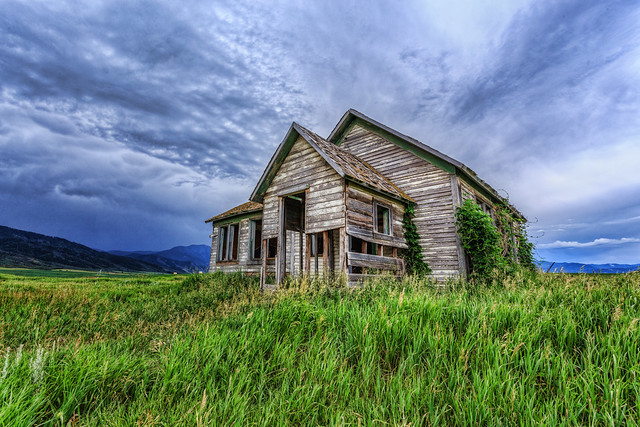 Another abandoned school house.  This one is on a dirt road in Swan Valley, ID 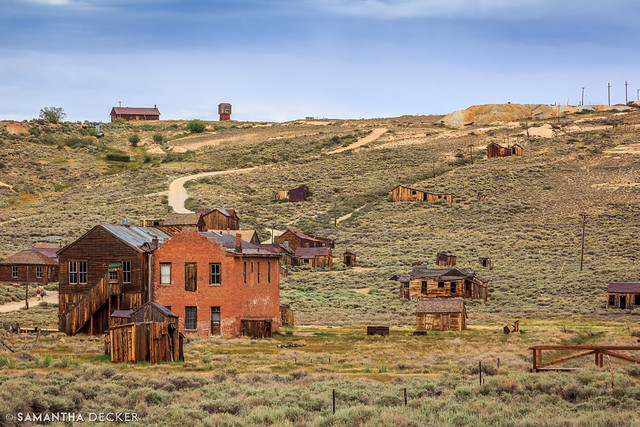 Bodie State Historic Park in California has the unique distinction of being a ghost town that is in a state of arrested decay; that is to say it's not being restored to its former glory, but it's being preserved as it is for visitors to see.  You can see more of my photos of Bodie here. 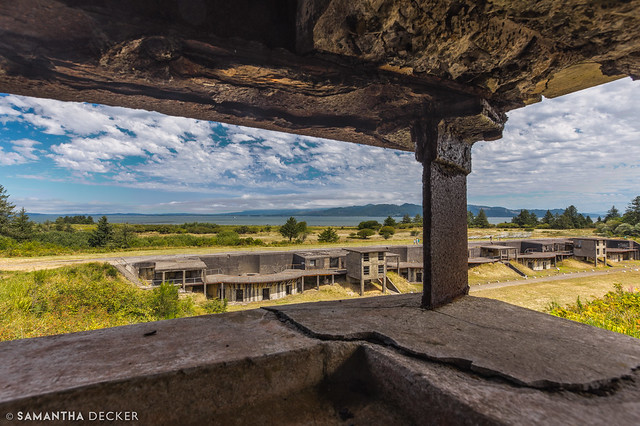 I took the above photo at Fort Stevens, located in northern Oregon on the Columbia River.  It was used in the Civil War and in World War II and is now a state park.  It has an abandoned factory feel to it.  Most of the buildings can be explored inside.  You can see more of my photos of Fort Stevens and other Oregon Coast historic sites here.

Alcatraz Prison was my favorite thing I saw when I visited San Francisco.  How many abandoned prisons, especially this infamous, are open to the public for touring?  The unique island location of Alcatraz and the evening tour made it all the more spookier and fascinating.  While photographing the individual buildings was fun, this photo from the boat ride over is one of my favorites. 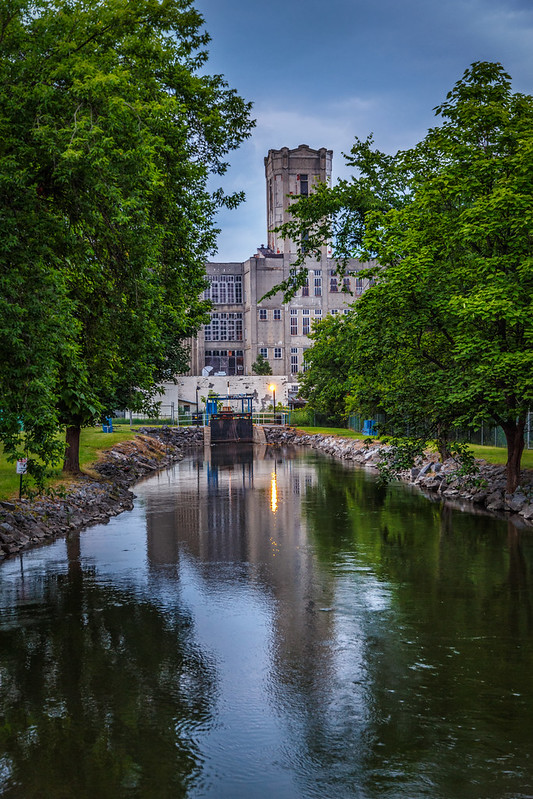 This abandoned textile mill is located in Victory Mills, NY.  Its location near this creek makes it a prime photo spot. 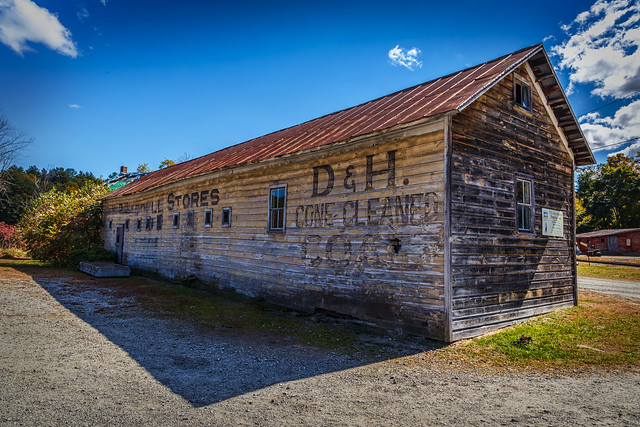 I love the faded writing on this old building in North Creek, NY. 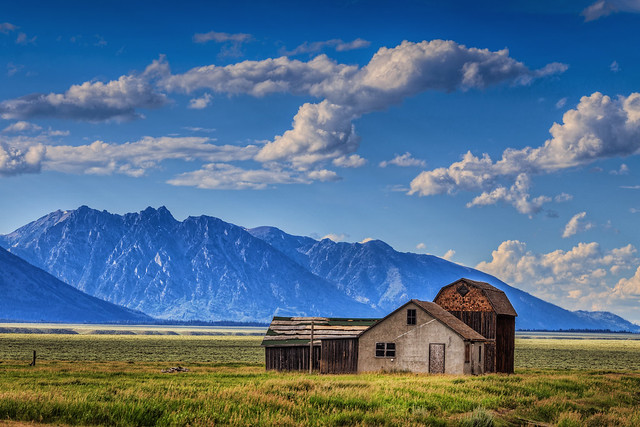 Another shot from Mormon Row.  This is really a photographer's paradise! 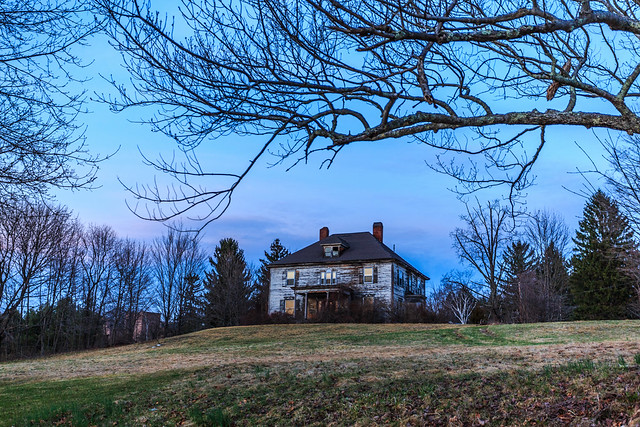 This house is up on a hill next to Halcyon Hall in Millbrook, NY.

The Fairfield Homestead outside The Dalles, OR, attracts lots of photographers (it's the same house at the top of the post). 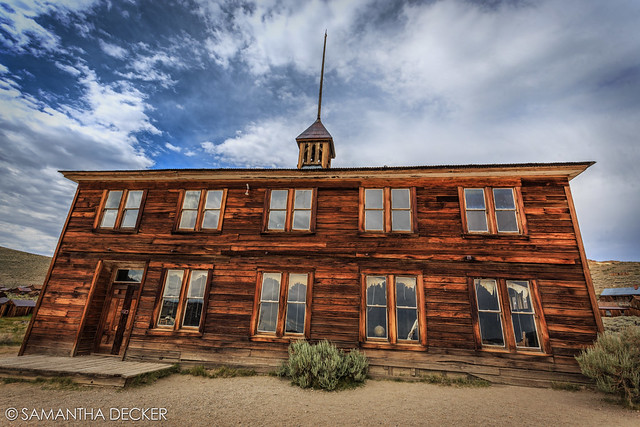 The school house is one of my favorite buildings in Bodie. 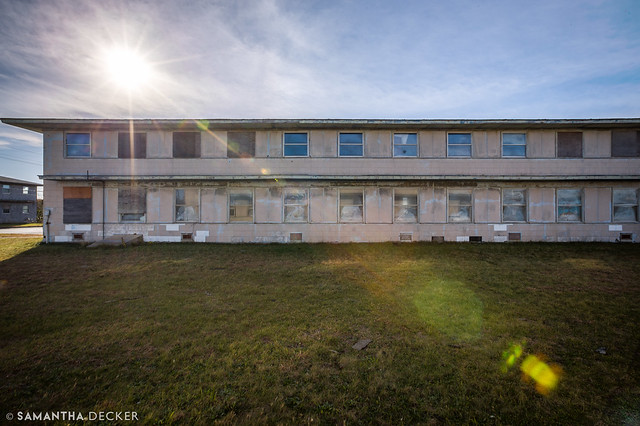 Another photo from the North Truro Air Force Station.  This was a housing unit. 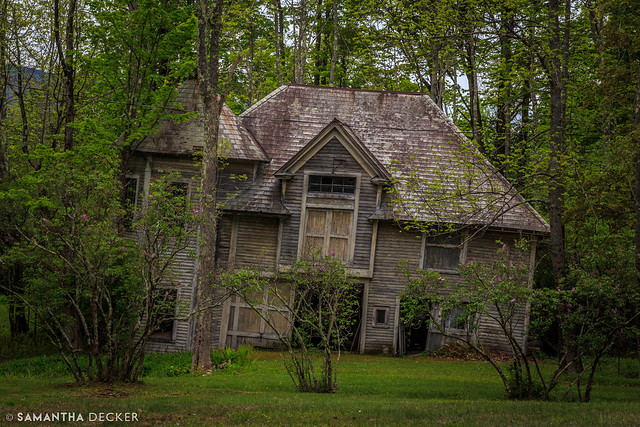 This carriage house in Manchester, VT, looks like it was once very charming.
Labels: inspiration travel